JUST IN: Tiwa Savage Reacts After Her Video Surfaced Online

Following the release of her video, Popular Nigerian singer, Tiwa Savage has reacted.

She called out the blog on her Instastories.

According to Tiwa, Gistlover isn’t happy with the way she handled her video scandal.

She claimed that Gistlover wanted to disgrace, destroy and shame her on social media by threatening to reveal her video gist before she did.

However, when the narrative changed by Tiwa talking about it in an Interview, Tiwa said that Gistlover didn’t like the outcome and went on her page to spread more lies about her.

JUST IN: BBNaija’s Cross Posts His Video On Snapchat

Tiwa Savage Opens Up On Her Recent Sex Tape

JUST IN: Seyi Shay Tells Her Side Of The Beef Story After Clash With Tiwa Savage

Tiwa Savage also revealed that Gistlover threatened to beat her wherever they come in contact. Reacting to the threat, Tiwa wrote: “You must knock my head when you see me otherwise”.

Tiwasavage: ‘You hated how I was able to control the narrative and get ahead of a story before it consumed me and how I’m able to joke on stage about something you taught should destroy me and make me feel ashamed

You must knock my head when you see me otherwise… Gistloversblog africa With my full chest.’

There are, however, insinuations that Tiwa’s lover, Abolo Beckham, a Nigerian based in Ghana, with whom she made the video, leaked it and not the blackmailer. They hinge this on the fact that it was only Tiwa whom he clearly captured as he was the one recording, while he conveniently didn’t capture his own face.

They also wonder why he uploaded it on Snapchat in the first place “mistakenly” and deleted it within seconds. Not a few concluded that Tiwa was better off without such a man who clearly doesn’t have her interest at heart 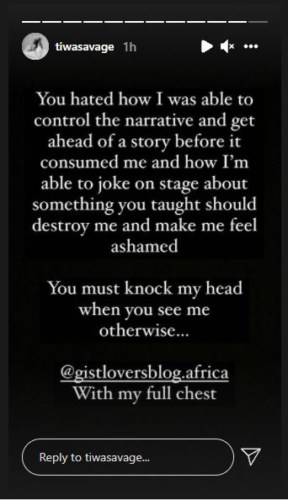 Man Arrested In Ibadan For Turning Students Into Yam Tubers(Video)

The Federal Government has rejected the decision of UK government to add Nigeria to it's red-listed countries over omicron variant....

The Governor of Kogi State, Yahaya BELLO has assured Traditional, political, religious stakeholders from Kebbi and Sokoto states that he...

Android users have been seriously warned of new method hackers are using to access money by answering their calls. The...

Students seeking admission into Universities, Polytechnics, Colleges of Educations and other higher institutions will now have two more subjects to...

The British High Commission has halted the issuance of visas to Nigerians. The Commission said it has suspended visitor visa...

Faces of students that reportedly beat 12-year-old Sylvester Ororomoni, a student at Dowen College in Lekki has been revealed. DAILY...