According to reports, The charge may not be related to extradition as widely expected

It may be for immigration-related offences, DAILY GIST has learnt.

Igboho was said to be in possession of a forged Beninois passport.

DAILY GIST reports that The Republic of Benin rejected the federal government attempts to hastily extradite the activist.

Serious Drama As Woman, Daughter Beat Up Landlord In Ondo

The is coming after the Nigerian government had placed Igboho on a stop list, a development the federal government claimed it would facilitate his arrest anywhere he is found.

Until his arrest, Igboho’s whereabout was unknown to the general public since the Department of State Services(DSS) had raided his house in ibadan and declared him wanted.

According to reports, Igboho was nabbed in Cotonou, Benin Republic with his German wife, Mrs Ropo Adeyemo in an attempt to flee to Germany to evade arrest by the DSS operatives in Nigeria

Igboho was arrested by the security forces in Benin Republic about three weeks after the Department of State Services declared him wanted for allegedly stockpiling arms, an allegation he has since denied.

However, It was gathered that the Nigerian Government planned to extradite the activist on Wednesday (yesterday), but Benin Republic insisted that it would not be part of any process that was against due process.

Benin Republic had shown itself to be a country that respects the rule of law and due process.

Igboho’s lawyer, Yomi Alliyu (SAN) alleged that his client is facing inhuman treatment, as his legs and hands are allegedly tied like an animal in police custody.

A court hearing scheduled for Wednesday had failed to hold.

However on Thursday, Sunday Igboho has appeared at the Cour De’appal De Cotonou, Benin Republic

Join DAILY GIST on the live update of Sunday Igboho’s Trial below and keep refreshing this page for more details;

11:00 am: Igboho supporters have stormed the court ahead of the activist trial on immigration-related offences. 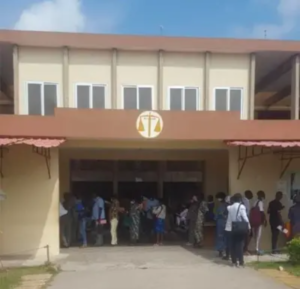 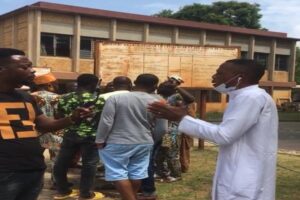 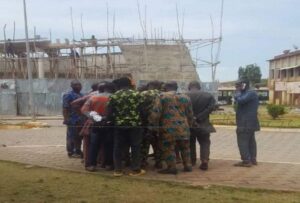 1:00 pm: Sunday Igboho on Thursday afternoon arrived the court ahead of his arraignment by the authorities.