Gunmen suspected to be Fulani terrorists have unleashed fresh terror attack on travellers in Oyo state.

DAILY GIST on Sunday learnt that the attackers kill a commercial driver and five persons including a woman were abducted  at Onigaari shortly after the toll gate along the Lagos-Ibadan expressway.

The commercial driver is identified to be Oluwatosin Aruwajoye while another passenger, Ibrahim Tiamiyu, was shot in the thigh.

The armed kidnappers suddenly jumped out of a nearby bush on Friday night, January 7 and started shooting sporadically in the presence of other motorists. 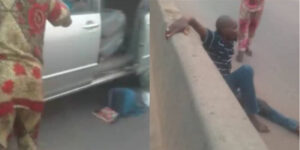 The sienna bus driver, Oluwatosin Aruwajoye, was shot dead by the suspected kidnappers while trying to maneuver his way out of the attack.

A passenger was said to have been shot on his knee and was later taken to an undisclosed hospital for medical attention.

On getting information about Tiamiyu, the brother of the injured victim reportedly rushed to Toll Gate Division of The Nigeria Police where he reported the case.

Police operatives from the Oyo State Police Command’s Anti-Kidnapping Squad and the Toll Gate Police Division were said to have moved to the scene immediately they got the information and rushed the injured victim to the hospital for treatment.

The family of one of the kidnapped victims has been contacted and a huge ransom has been requested by the kidnappers.

Several operatives were said to have combed the bush in a move to rescue the victims and apprehend the perpetrators.

The driver’s corpse was also deposited in the mortuary at Adeoyo State Hospital, Ring Road.

It was also gathered that kidnappers have demanded N30 million as a ransom for the female victim.

He described it as unfortunate.

The PPRO said that there would be an update in due course.