A self acclaimed Islamic cleric and one other have been arrested while exhuming 16 skulls and body parts from a burial ground at Kilometer 1, Moniya-Iseyin road, Iseyin, Oyo State.

It was gathered that they were arrested after they had exhumed the corpses and parked the parts in sacks along the Alamole area by men of Odua People’s Congress and Yoruba Revolutionary Movement.

According to reports that the suspects, Alfa Yunusa Atikoko, and Wasiu Ajikanle, committed the crime on Tuesday, January 4.

They were red-handedly caught during the act.

Eyewitness said that the suspects have been handed over to the police for further investigation and prosecution.

The Oyo State Police Command is yet to react to incident. 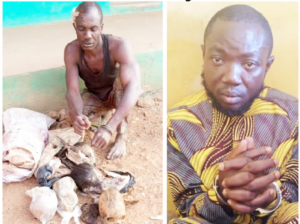 UPDATE: How Killer Proprietor Deceived Us When He Visited Over Hanifa’s Abduction — Family