The duo who are both staff of a logistic company located along the Murtala Mohammed highway went missing after visiting a ‘girlfriend’ in Calabar they reportedly met through a social networking site, facebook.

According to TheParchment, after series of chat, the lady invited the duo to her place at Ekorinim 2 where they could meet.

One of their friends identified as Uforo, who was lucky not to have followed them told out reporter. “they have been chatting through facebook messenger with the girl and that day I was supposed to follow them to Ekorinim 2, where the girl asked us to come and see her, but they left before I could come out”. 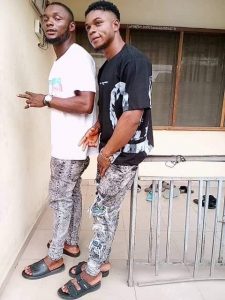 Both Henry and Wisdom are from Ikom local government area of Cross River State, while Uforo is from Akwa Ibom State.

BREAKING: Why We Kept 77 People Underground In Church – Ondo Pastors Open Up

They then took a tricycle to meet with the said lady. “That was the last time we heard about them. Because after awhile, we kept trying their numbers, but it has remained switched off. They have also not returned home since then“

Another source who described the boys as hardworking young men said “at first we thought it was a case of kidnap, but we have been to all the police stations in the state capital, including the Anti Cultism/Kidnapping squad at cultural center, Zone 6 and even the police state headquarters and have not found them. They have not returned home since then and all their numbers have remained switched off.

“There are not lazy boys that we will say went to do something else, the kind of work they do is a really a hard job. So we are surprised ” said the source.

As at press time, attempts to reach the police spokes person in the state, Irene Ugbo was unsuccessful as she did not pick her calls. A short message sent to her was also not replied.

Incidents of kidnapping and ritual killings have covertly continued to remain rampant within the state capital and environs.

Last year, several mutilated and headless bodies of mostly women and young men were discovered in a valley along the busy Odukpani-Calabar highway, close to the city gate. Despite public cry, the state government kept mute about the incident. No arrested was made, nor a committee set up to investigate the strange act.

ASUU Strike: NLC To Embark On Nationwide Strike In Solidarity With Unions, Students