Popular and Talented Nigerian singer, Seyi Shay is currently trending on microblogging platform, Twitter, after she criticised a 17-year-old male contestant during the audition on the Nigerian Idol show on Sunday.

Seyi Shay who was not impressed with the singing of the 17-year-old boy told him he would be better as a songwriter and not a singer.

The singer who is a judge on the show said, “somebody lied to you. Somebody told you to come here and audition. You should go back and tell them that they aren’t your friend because that was not a good audition. You have a sweet-talking voice and it comes out in your singing voice but your performance is terrible. You are never going to make money from being a singer. I love you, you are so sweet but you are not a singer. You are not a singer.”

“For songwriting, hit me up, we could talk but that singing, it is not going to work. Sorry, Darling.”

The statement of Seyi Shay, however, did not go well with Nigerians who felt she was harsh on the contestant.

Seyi Shay has replied to her critics on her official account on Twitter, she also appreciated Nigerians for making her the trend on the platform.

JUST IN: Seyi Shay Tells Her Side Of The Beef Story After Clash With Tiwa Savage 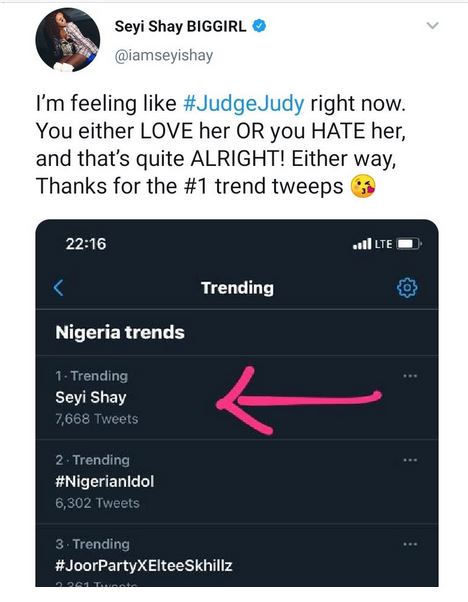 She wrote, “I’m feeling like #JudgeJudy right now. You either LOVE her OR you HATE her, and that’s quite ALRIGHT! Either way, Thanks for the #1 trend tweeps.”

FULL LIST: Nigerian Artistes Who Are Currently Making Wave Abroad With Their Music

Some yet-to-be-identified gunmen have attacked members of the Labour Party who were holding a meeting in Enugu West Local Government...