A 29-year-old man, known simply identified as Pingping has set tongues wagging on social media over his stature.

He has gone viral for not growing beyond a baby stature.

The baby man was reported to be suffering from a rare genetic illness that hampered his growth.

The medical condition affecting Pingping was said to be Progeria.

The video which went viral on social media showed Pingping being handled as a toddler despite being old. 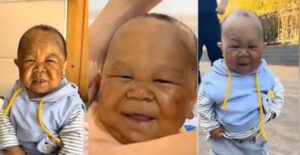 Top Ten Best Foods That Boost Your Immunity Against Diseases

He was reported to have his own family.

According to Mayo Clinic, Progeria, also known as Hutchinson-Gilford syndrome, is an extremely rare, progressive genetic disorder that causes children to age rapidly, starting in their first two years of life.

Children with progeria generally appeared normal at birth. During the first year, signs and symptoms, such as slow growth and hair loss, began to appear.

Heart problems or strokes were the eventual cause of death in most children with progeria. The average life expectancy for a child with progeria was about 13 years.

Some with the disease may die younger and others may live longer, even up to 20 years.

Owo Massacre: Real Reason Why We Have Not Paraded Arrested Suspects — Amotekun