Some popular politicians in Nigeria, Over the years, have been victims of sex scandals that rocked the country. 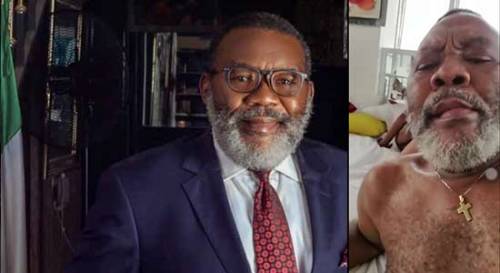 The latest politician to be involved in a sex scandal is an appointee of President Muhammadu Buhari, Chief Willie Amadi.

A sex video released in January had showed Amadi in a room with two girls making out.

Apostle Suleiman Finally Speaks On Sleeping With Over 10 Nollywood Actresses

In the video, Amadi, a lawyer and Federal Commissioner, Imo State Office of the Public Complaints Commission, was seen in a 12-second video that captured him and the girls in a compromising position.

Few days after the video went viral, an Imo State Magistrates’ Court convicted a 20-year-old school leaver, Peter Nwoke, for superimposing a picture of Amadi onto a video of the two women to put the President’s appointee in an awkward position so he could blackmail him.

However, sources told SaharaReporters that Nwoke made the confessional statement that he had superimposed his video onto another after being threatened and promised millions of naira.

“The narrative that one Nwoke Peter edited a sex video to blackmail Amadi is false. It was well planned by Amadi and some top police officers. I was reliable informed that they promised the young boy millions of naira to cooperate with them; this was after they threatened the young man several times.

“I can’t say the exact amount that was paid now but I was told he has been paid part of it. He (Amadi) claimed it was a video from a pool side that the boy edited; tell him to show us this original video, I mean the video he claimed he took beside the pool which the guy superimposed on another.

“Like I said earlier, it was all planned to save Amadi from losing his current job as an appointee of President Buhari and his future political ambition. Imagine, this guy was arrested, investigated and sentenced to prison within nine days, not even a month, my brother, nine days. What kind of investigation was done without a forensic analysis? I pity the young boy though, he did everything under duress,” a senior police officer told SaharaReporters.

Speaking to SaharaReporters, a Lagos-based forensic expert, Gbenro Akinyomi, said an analysis of the video using an InVID software showed it was not superimposed.

“Check the video very well, there is a mirror behind the scene reflecting the true activities. The man (Amadi) recorded the video; he was involved in the act. Since he claimed it was superimposed, what about his image on the mirror in the background? Was that edited as well? The video is real,” he told SaharaReporters.

Meanwhile, a veteran Nollywood actress, Mrs. Hilda Dokubo, had demanded further investigation into the case, saying the accused might have been forced to own up to a crime.

Dokubo said the young man could not have committed such a crime because there was no technology at the time that one could use to superimpose a photo on a video or motion picture. 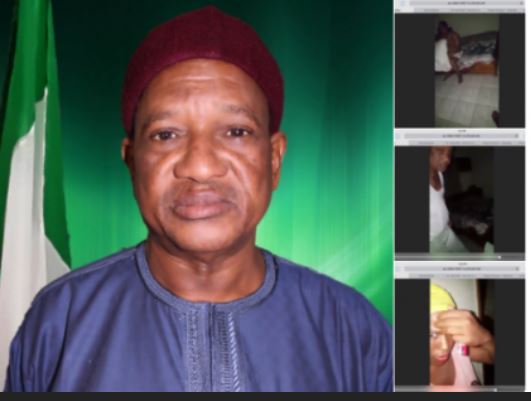 In 2017, a senator and former governor of Yobe State, Bukar Abba Ibrahim, was shown in a viral video published by SaharaReporters dressing up in the presence of two women in a dingy hotel room.

Ibrahim however said that he had not committed any official wrongdoing and the video was only made public after attempts to blackmail him failed.

“This is a personal, private matter. What does my having been with a girl have to do with the public?

“You know the normal thing: people ask for unreasonable things, and if you deny them, they try to blackmail you if they have a way,” he said.

The senator further said he owed no one an explanation since he was not accused of any crime. 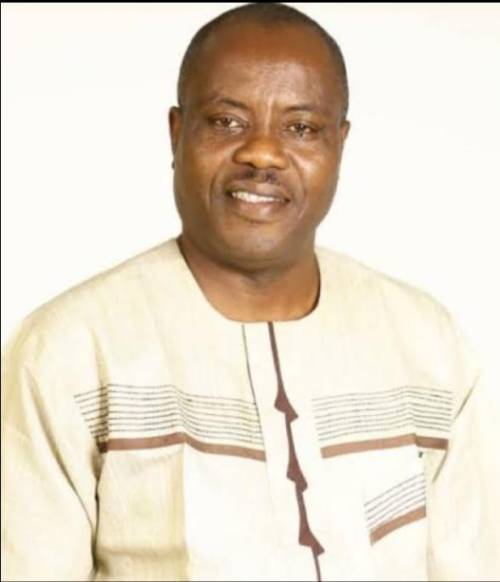 A 16-year-old secondary schoolgirl had alleged in a video on Facebook that Abiodun Abudu-Balogun, the suspended Commissioner of Environment in Ogun state tried to rape her.

She said, Abudu-Balogun, who was a member of the House of Representatives, connived with her uncle and a teacher on December 31, 2020 to lure her to the commissioner’s residence at Ita Otu, Ogun Waterside LG, on the pretence that he would assist her secure a job as a computer operator.

The girl narrated how Abudu-Balogun allegedly fondled her breasts and tried to force himself on her when she refused to succumb.

She said when she screamed, he forced N2,000 into her hands and asked one Austin, a teacher, to take her home.

The commissioner, in a signed statement, described the allegation as “political blackmail” by those he called his “adversaries.”

“Let me state emphatically that I never attempted to sexually harass anyone,” he said.

But a statement signed by the Secretary to the State Government, Tokunbo Talabi, on Sunday, announced the commissioner’s suspension from office “pending the conclusion of an independent investigation into the allegation of sexual harassment.”

Although in two separate videos, the schoolgirl and her father, Melojuekun Monsuru, said they were no longer interested in pursuing the case, the Ogun State Police Command insisted on going ahead with the investigation, describing it as an offence against the state.

Three House Of Representatives Members’ Misadventure In The US 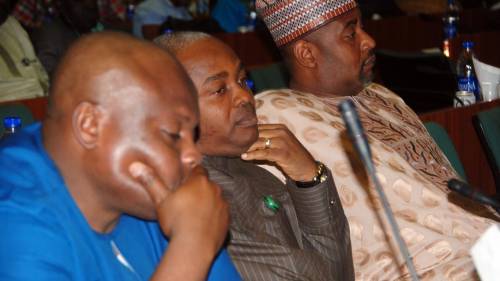 In 2016, the then US Ambassador to Nigeria, James Entwistle accused members of the Nigerian House of Representatives of improper conduct while on an official trip to the US.

Specifically, Entwistle accused these members of attempted rape and solicitation of prostitutes.

He made the allegation in a letter dated June 9, 2016 addressed to then Speaker of the House of Representatives, Yakubu Dogara.

Entistle petition reads: “It is with regret that I must bring to your attention the following situation. Ten members of the Nigerian National Assembly recently travelled to Cleveland, Ohio as participants in the International Visitor Leadership Program on good governance.

“We received troubling allegations regarding the behavior of three members of the delegation to the US Government’s flagship professional exchange program.

“Mohammed Garba Gololo allegedly grabbed a housekeeper in his hotel room and solicited her for sex. While the housekeeper reported this to her management, this incident could have involved local law enforcement and resulted in legal consequences for Representative Gololo.

The honourable members, however, denied the allegations and were later cleared after an investigation by the House of Representatives Ethics and Privileges Committee.

In 2020, former Acting Managing Director of the Niger Delta Development Commission (NDDC), Joy Nunieh, claimed that she slapped the Minister of Niger Delta Affairs, Godswill Akpabio, for sexually assaulting her.

She disclosed this during an interview with Arise TV where she said she was the only Nigerian woman who had slapped the minister. The incident, she said, happened at his guest house in Abuja.

“Why did he not tell Nigerians that I slapped him in his guest house at Apo? I am the only Ogoni woman, the only Nigerian woman that has slapped him. I slapped him because of his plan B. Since he couldn’t get me to take that money, he thought that he could come up on me,” she had said.

“He didn’t know that I’m a Port Harcourt girl. Port Harcourt girls are not moved by money…by somebody telling me that he will make me the substantive MD. Akpabio’s meetings with me were either at Apo or Meridien…Yes, I am accusing him of sexual harassment.”

But Akpabio, in a statement by Anietie Ekong, his media aide, described the allegations as “litany of lies.” It further said that Nunieh’s attacks were both personal and sponsored. 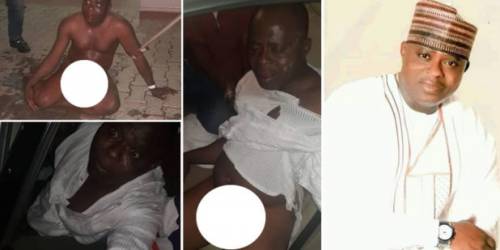 A nude video alleged to be of then Nasarawa Deputy Speaker and Senator, Godiya Akwashiki, went viral in March 2019.

He was allegedly caught in the act of trying to sleep with the wife of former National Judicial Council (NJC) secretary, Danladi Envuluanza.

The images showed the lawmaker being molested in a 16-second clip in which he was stripped naked.

Another showed him seated naked in a car, with only a ripped vest on.

He was hit several times by two people, while he repeatedly said, “Sorry.”

A source close to the Envulanza family said that Akwashiki accepted the allegations and attributed it to the devil in his confessional statement to the police at the Maitama police station.

He said the lawmaker got Mrs Envulanza’s number with the intention that she would help him convince her husband to support his senatorial ambition.

“After the election, he has been calling her more often, like three to four times daily. With the way events have taken a different dimension and the fact that he has shown interest on Danladi’s wife, she warned him on two occasions,” he said.

He said despite the warning, the lawmaker still persisted in making sexual advances towards her.

Not satisfied with the answer, he called Danladi’s driver to also ask about the whereabouts of his boss and of course, the driver told him that Danladi had travelled to Jos.”

“It looked like a perfect time for the devil to book an appointment with Danladi’s wife.

“He phoned her and made arrangements for her to meet him at exclusive stores supermarket where he would buy the drinks they would drink at the hotel he was taking her to,” the source said.

He said unknown to the lawmaker, Envulanza didn’t travel to Jos and was aware of the plan and had been monitoring the situation.

“It was after he picked her up and was taking her to a hotel that he was caught and beaten by some angry youths. He was then handed over to the police.

“At Maitama police station, Godiya Akwashiki confessed to have been trying to sleep with Danladi’s wife and that he was taking her to a hotel,” he said.