Some fresh damning evidences has been revealed against the embattled actor, Olarenwaju Omiyinka populaly known as Baba Ijesha.

The industrial action by the Judicial Staff Union of Nigeria had stalled the case but the case commenced on Wednesday as the judicial workers called off their strike last week.

Magistrate Nwaka, however, refused the actor’s fresh bail application on the ground that the Lagos State Ministry of Justice had filed charges before a High Court.

In a turn of events, Princess took to her verified Instagram account to release some damning evidence against Baba Ijesha.

FULL TEXT: OAU Student’s Message On Allegation Against Her Lecturer

The comedienne, in a series of posts, shared a recording of Baba Ijesha, alleging that while in police custody, he instructed his group members to spread false information.

In the voice note shared, Baba Ijesha was heard saying, “When something happens to someone that has a name, one must tread carefully so that the matter will die down. If you keep answering her, the matter will not die down. After she said this, she cannot say another thing tomorrow. She cannot go to social media again because they have banned everything.

“You people should not fret; all of you should just keep doing publicity for me but act as if you do not know me. Share messages; I know you know how to write inspirational articles. Just say that we do not know the truth yet but Baba Ijesha will still come out by himself. That is all you need to say. Apply wisdom in all you do.”

The comedienne further shared some messages she got from a lady who identified herself as Makinwa Elizabeth. The young lady told Princess that she works as Baba Ijesha’s secretary and also the admin for Baba Ijesha WhatsApp group.

In the voice note, she claimed that she and her sister were almost victims of the embattled actor.

Elizabeth was heard saying, “My name is Makinwa Elizabeth. I am Baba Ijesha’s worker; his secretary and the group admin. Seriously, as I am chatting with you, I am in tears. To be honest, at first, I was against you. To be frank with you I was against you because I thought you were trying to form some things against him. But I am disappointed. I know you are not lying. When you levelled the allegation against him, I knew you were not lying because Baba Ijesha is a flirt. But I thought what you said seven years ago was not real. We are all disappointed in the group we belong to.

“I understand your pain and I feel your pain. I have been uncomfortable ever since I watched that video. We, members of the group, went to him and asked him for the truth, but this man lied. You will be surprised about the lie that he told us.
“Please, do not be angry at me. Seriously, I know what you are saying. He has done this thing to me before; apart from harassing me, he did it to my blood sister. It has not been up to six months ago. God saved her.

“Please don’t be angry; the whole group is sorry. The lie was just too much. He told us that both of you were once together. I went to meet him and asked that ‘Oga, is this thing real?’ I know he is a flirt because we work with him and we go around with him. When we go to a movie location, he can abandon us there. He did it to me as well but it is a long story. I did not know that he could do something like that. He lied to us.”

Elizabeth further claimed that ever since the allegation of sexual assault was made public, members of the groups had reached out to her to share their experience.

She said, “Those people are not telling me but because of this incident, they are now telling me as the admin. They are now recounting a lot of things in the group. Different people have been calling me to tell me what he did to them. They did not tell me before now, although we talk to him, he hardly listens because he is our boss. Even his senior colleagues have been advising him but he did not listen.”

In another voice note, Princess released, an unnamed lady claimed she was almost raped by the actor.

She said, “On this Baba Ijesha’s case, the man is the one who put himself into trouble. I remember a day we were at a movie location, and Baba Ijesha was there; I still have the picture we took together. The moment I got to the location, his eyes were fixated on me. He said he wanted to send me on an errand and I followed him to his room. If I was not a lady blessed with strong bones, I would have been telling another story. He almost raped me on that day. I pushed him away as he tried to force himself on me.

“My elder siblings called me when the issue happened to ask if Baba Ijesha could do such a thing, I said, ‘yes, he can’. Please, do not support him at all. He has been doing this thing for a long time. If not that I do not want any problems for myself and I do not have the means to fight him, I would have done a video narrating my encounter. Please do not support him; he is the one that put himself in this predicament.”

Princess in the same vein also released another allegations about the embattled actor on Instagram.

In a voice note released by Princess, a Nollywood actress is heard narrating how Baba Ijesha tried to rape her on set.

The actress, whose name is also Princess, said she was on location when she met Baba Ijesha.

She said the actor couldn’t keep his eyes off her.

She claims Baba Ijesha then called her and told her he needed her to help him run an errand. She said she followed him to his room where he allegedly tried to forcefully have sex with her.

She adds that if not for God’s grace on her, he would have succeeded in raping her. She says God gave her the strength to push the actor away and that’s how she escaped.

She says she still has a picture she took with Baba Ijesha on that day before he allegedly tried to rape her.

She added that Baba Ijesha has been doing this to others.

She said that when the Baba Ijesha scandal came to light, her relatives called her to ask if Baba Ijesha is capable of such and she told them, “Yes, he can do something like that.”

She asked people not to support Baba Ijesha because “he has been doing this rubbish for a long time.”

She said Baba Ijesha brought his current plight upon himself because of his lack of control around women. 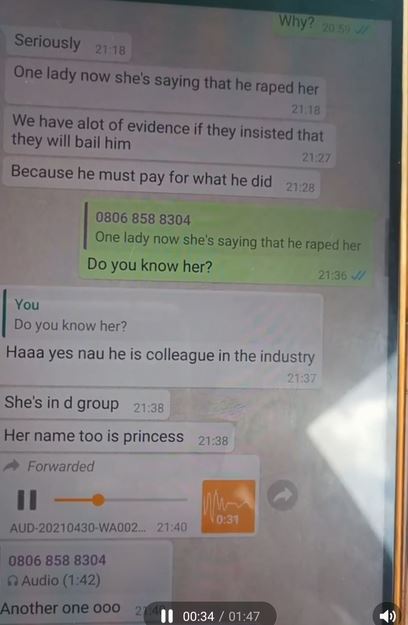 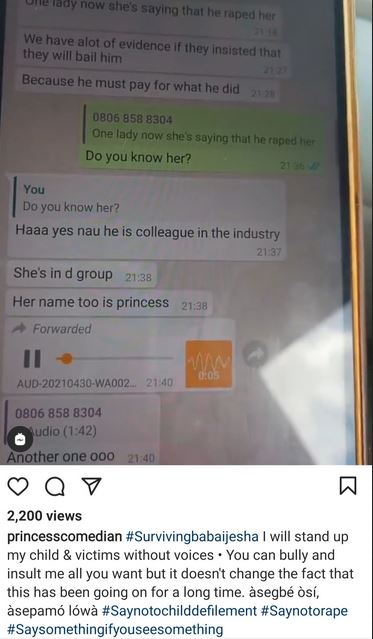