Senator Adetunmbi: What Do ‘The Electorate’ Want?

I have been asking myself what do the electorate want from their politicians. Is it deceitful governance or purposeful governance?

Senator Olubunmi Adetunmbi, the lawmaker representing Ekiti North Senatorial District is an uncommon politician with a different approach to governance and politics.

Unfortunately, his approach to governance does not go down with some people because they have been programmed to politics of deceit.

Senator Adetunmbi may not be our regular politician that will throw money around for cheap popularity. He may not be going around beer parlors to buy drinks for political gains. But ever since his return to the red chamber of the National Assembly, he has been genuinely attracting Infrastructure development to his Senatorial District without making noise which our politicians are known for.

Our people love politicians to be playing to the gallery, but Senator Adetunmbi will rather do what is needed of him efficiently without media attention. 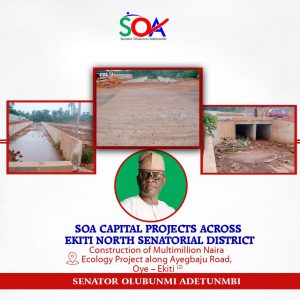 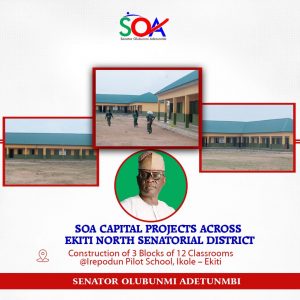 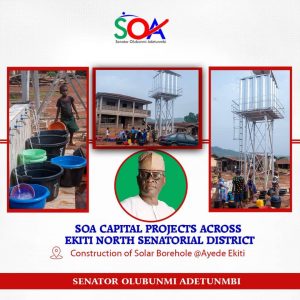 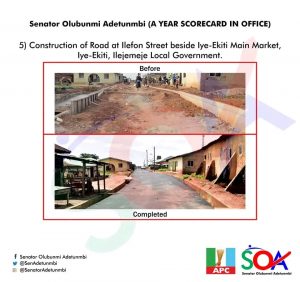 I can confidently confirm that no lawmaker in the history of Ekiti state has attracted Infrastructure development as Senator Adetunmbi.

He touched all the Local Governments in his senatorial district with projects that some state governors will be happily publicized as their achievements.

Below are some of the projects Senator Adetunmbi sponsored and facilitated for his Senatorial district:

*Procurement and Installation of a transformer at Igogo-Ekiti.

*Procurement and Installation of a transformer at Osan-Ekiti.

*Construction of road and erosion control at Oye-Ekiti

*Construction of asphalt-laid road at the market road, Iye – Ekiti

*Procurement and Installation of a transformer at Ifaki-Ekiti

Senator Adetunmbi awarded bursaries to over 500 students in Ekiti North Senatorial District. Each student got Fifty Thousand Naira (N50,000.00) each.

Senator Olubunmi Adetunmbi trained over 200 unemployed graduates in Ekiti North Senatorial District on ICT and wig making at three centers- Ifaki-Ekiti, Ikole-Ekiti, and Otun-Ekiti.
At the end of their training, they were empowered with start-up kits.

The lawmaker also trained over 300 Artisans across Ekiti North Senatorial District. Money was also given to them to support their work.

*Senator Adetunmbi facilitated a Federal Government Covid-19 loan to 50 of his constituents to the tune of N20million.

*The lawmaker also facilitated
NDE Special Public Works for over 1000 beneficiaries in his district. Each beneficiary got N60,000 making a total sum of N66million.

*N30,000 was given to Iyaloja/Iyalaje in all communities in Ekiti North Senatorial District.

*N50,000 to the Female Chiefs in all communities in Ekiti North Senatorial District.

We should not forget that Senator Adetunmbi has worked only with the 2020 and 2021 budgets. The implementation of the 2022 budget will begin soon and several lives impacting projects that will cover the remaining communities that have not been captured will begin.

I don’t want to talk about his performance on the floor of the Senate. Because that has been reported many times. Even his sworn enemies always praised him for a job well done.

So, if it is about making a real impact on the electorates, Senator Adetunmbi has performed brilliantly. He is a silent achiever that has redefined good governance as seen in developed countries.