DAILY GIST reported that the top monarch joined his ancestors in the late hours of Friday.

Taking to his Twitter handle, Adebayo expresses sadness over the Monarch’s demise, describing him as one of the pillars of peace and tradition Yoruba land.

“With a deep sense of personal loss and national tragedy, I mourn the demise of Oba Lamidi Olayiwola Atanda Adeyemi III, Alaafin of Oyo after 51 years of 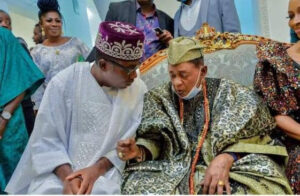 graceful reign 29 of which Baba and I shared deep paternal, philosophical and ideological chemistry”, Adebayo tweets.

JUST IN: Fate Of Abobaku For Late Alaafin Of Oyo Revealed

JUST IN: Fate Of Abobaku For Late Alaafin Of Oyo Revealed