It has been revealed why Sheikh Nuru Khalid was sacked by Apo Legislators’ Quarters Central Mosque Committee.

Kperogi disclosed that the move was closely related to the 2023 Presidential Elections.

Below is a full statement from Kperogi, obtained by DAILY GIST;

“Someone sent me this memo that the Apo Legislators’ Quarters Central Mosque Committee sent to the intrepid Sheikh Nuru Khalid informing him of the termination of his appointment as Imam of the Apo Juma’at Mosque for telling truth to power.”

“The person who shared it with me was at once bemused and amused by its hilarious grammatical infelicities, but I honestly don’t care about that. As a student of Freudian psychoanalysis, I’m always interested in exploring the underlying motives that “innocent” mistakes reveal.”

“Sigmund Freud taught that some slip-ups in speech (and in writing) can provide a window into people’s unconscious, suppressed but nonetheless important thought-processes.The slip-ups unintentionally expose what troubles them, what they’re obsessed with but which they seek to suppress from their conscious thoughts.”

“Adams Oshiomhole, for example, infamously said for democracy to thrive people must learn to accept the “pain of rigging” (before correcting his slip-up and saying “losing”) shortly after engineering the massive rigging of the governorship election in Osun State, which Buhari also confessed was won through “remote control.”

“Recall that the stickiest part of the Sheikh’s khutbah (sermon) was his exhortation that people should not come out to vote in 2023 if politicians won’t or don’t make a commitment to protect the lives of everyday people who’re sitting ducks for terrorist bandits. “Let us be killed—we’ll not come out to vote since it’s only elections you people know,” he said.

“The “4th April 2023” slip-up betrays the committee members’ obsession (a word the memo inappropriately used in the first sentence of the last paragraph) with the 2023 election.”

“But the fact that they’re frightened by the Sheikh’s threat that people won’t vote if there’s no guarantee that the killings will stop shows that they have no plans now or in the future to protect the lives of our people, which is actually a constitutional obligation they swore to uphold.”

“Well, let’s keep the receipts for what they’re doing now because when the tables turn, i.e., when a Christian from the South becomes president, and they instrumentalize religion to oppose him or her, as they did in the past, we’ll remind them of this moment.We’ll remind them that they don’t love Islam, that they’re bloodthirsty, self-interested opportunists.” 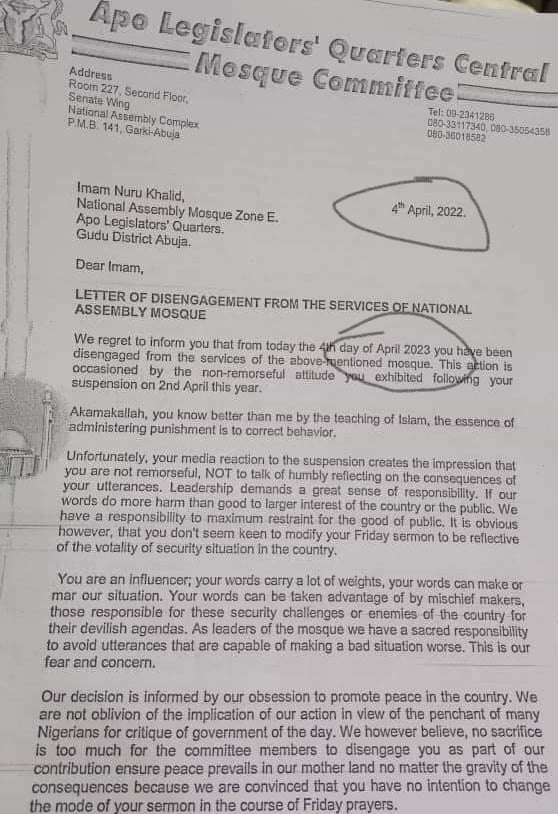