A student of the Polytechnic of Ibadan has reportedly lost his life after marathon romp with his girlfriend.

DAILY GIST reliably gathered that the deceased partner who they both have the romp is currently in coma at UCH, ibadan

The student, identified simply as Oromidayo, was said to have gone home with his partner, identified as Aramide, after the cancellation of exams by the school authorities.

Both students reportedly took sex-enhancing drugs and afterwards engaged in 11 rounds of sex.

Oromidayo, a student of the Civil engineering department, was found dead in the room, while Aramide was barely alive and was rushed to UCH, where her friends were told she had less than a 5% chance of survival.

Meanwhile, Aramide’s friends have been unable to reach her parents as they couldn’t find her phone, and no one has her parents’ contact details.

FULL LIST: Popular Nigerian Celebrities Who Have Lost Their Sons 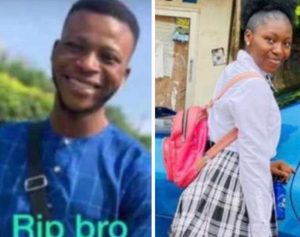 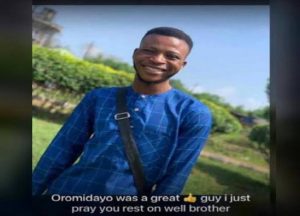 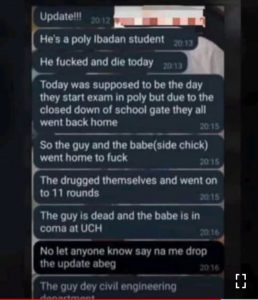