A lecturer at the University of Calabar, Paschal Aboh, has been arrested for allegedly impersonating a resit student.

Aboh was nabbed during the law exams at the Bwari campus of the Nigerian Law School.

DAILY GIST gathered that the lecturer, who is presently in police custody, is reported to have confessed to the crime.

According to reports, his accomplice was previously banned by the Council of Legal Education from resitting the Bar Final exam. 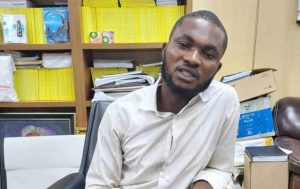 But luck ran out of him, as he was caught.

BREAKING: Abducted LAUTECH Student, One Other Killed After Ransom Payment

2023: Drama As Varsity Lecturer Orders Students To Get PVC In Exchange For Test Score(Photos)

The suspect had earlier claimed to be a law graduate of Olabisi Onabanjo University, Ago-Iwoye.

However, from available records, Aboh graduated from the University of Calabar over four years ago and was recently appointed as an Assistant Lecturer at the same institution.

The suspect, along with his accomplice whose name was yet to be ascertained as at press time, are to be charged to court for the crime upon receipt of DPP advice.

After his criminal trial, he will also face the Legal Practitioners Disciplinary Committee of the Nigeria Bar Association for breach of professional ethics and misconduct.

Reports claim that Aboh belongs to a cartel, which includes staff of the Nigerian Law School, whose business revolves around exam malpractice during bar resit exams.

The current Director-General of the Nigerian Law School, Prof. Isa Ciroma (SAN), has vowed to ensure that all the culprits are brought to book.