Here is a list of nine pastors who predicted that Nigeria’s President Muhammadu Buhari is the messiah to lead the country to prosperity.

A list of some popular Nigerian pastors who misled Nigerians by predicting that Nigeria’s President Muhammadu Buhari would end insecurity and lead the country to prosperity have been compiled.

Prominent among them is Father Ejike Mbaka who has now made a U-turn in an apparent bid to save face.

Back in March 2015, a number of Nigerian pastors and clerics gave different prophecies that President Muhammadu Buhari’s coming would bring an end to insecurity, economic crisis and other challenges facing the country. 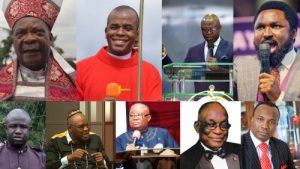 FULL LIST: Prophecies By Nigerian Pastors That Failed To Come To Pass In 2021

Not only have the problems of insecurity and economic recession become near intractable for the Buhari administration, they have given birth to growing violent calls for secession and agitations for self-determination.

1. Pastor Sunday Adelaja is the Senior Pastor of Ukraine-based Embassy of God who openly supported Buhari and predicted that his coming would end the country’s problems.

In January 2015, Adelaja, claiming he was convinced by God, stated, “As an army General, I think Buhari has the rudiments and qualifications to adequately respond to our national security challenges. I support the Buhari/(Yemi) Osinbajo ticket because I believe in the leadership attributes of the man.”

2. Prophet Emmanuel Omale is the founder of Divine Hand of God International Ministries, who prophesied the victory of President Buhari in the 2019 election, saying his coming would benefit the poor.

“I am a prophet of God and by the grace of God, I have been prophesying from the age of eight. Since then till now, anything the Lord tells us comes to pass because we hear from the Him; we don’t hear from men.

“God loves Nigeria so much. Nigeria is a big country, and is blessed for having people like us. God loves Nigeria and that is why he brought Buhari back. The coming back of Buhari is going to be for the good of the people: the poor people are going to be able to eat three times a day; there will be light (constant power supply); we are going to have infrastructure; and God is going to use Buhari to build a new Nigeria, to lay a solid foundation.”

3. Pastor Tunde Bakare is the Senior Pastor of the Citadel Global Community Church, Lagos State, who disclosed that God showed him that Buhari had a role to play in stabilising Nigeria.

“After the controversial and divisive 2011 elections, as Nigeria drifted along with sectional undercurrents and the nation sought a unifying force, some of us prevailed on General Muhammadu Buhari not to quit the stage but to take back his words and form a coalition of the best of the North and the best of the South to salvage our nation.

“I played a critical role in that mission. God had shown me in a vision that GMB still had a role to play in stabilising Nigeria,” Bakare had preached to Nigerians.

4. The Spiritual Director of Adoration Ministry, Enugu State, Rev. Fr. Ejike Mbaka, endorsed Buhari in 2015 and in 2019, saying, “Among all the presidential candidates, Buhari stands in the best position to win the presidential election.”

In January 2019, Mbaka had said, “We pray for President Muhammadu Buhari; he is a man who understands the situation. Four years doesn’t mean eight years; he has finished his four years, I pray for peaceful transition that he may complete his remaining four years.

“The issue of Fulani herdsmen they said have killed everybody has stopped. Nobody is hearing about the bandits anymore; the man has changed.”

5. Prophet Ekong Ituen is the spiritual leader of Christ Deliverance Ministries Inc, Lagos State. He had prophesied in 2019 that he saw “no vacancy in Aso Rock in the next four years.”

He had warned looters to expect a hard time during Buhari’s second term when the pastor claimed Buhari was going to be “ruthless in fighting corruption.”

6. Bishop Kayode Williams was the National Coordinator, Christians for Good Governance, and pastor over Christ Vessels of Grace Church.

In March 2015, while leading a number of pastors for special prayer for Buhari’s emergence, he had said, “We want to observe seven days of special prayer on the seven mountains in the Southwest political zones comprising six states to pray for the victory of Buhari and Osinbajo in the March 28 presidential election.

“No one can do the same thing and expect different result. Nigerians must therefore get a change in baton. Nigerians deserve good life in the midst of all the resources that God has endowed us with.”

In a prophecy in 2019, he had said, “The present leadership in piloting the affairs of this great nation as was revealed to me will extend beyond 2019 and there is going to be a brighter light at the end of the tunnel, socially and economically.”

8. Reverend Moses Iloh was the General Overseer of the Soul Winning Chapel. He was one of the pastors who gave Buhari support in 2015 and joined the movement to actualise his election. He died in September 2018.

9. Archbishop Magnus Atilade was a former Christian Association of Nigeria chairman of the South-West region and the President of the Gospel Baptist Conference of Nigeria. He was a supporter of the Christians for Good Governance in 2015 which were routing for the emergence of Buhari.

He reportedly participated in prayers held with other pastors that Buhari should emerge. He died in January 2019

Owo Massacre: Real Reason Why We Have Not Paraded Arrested Suspects — Amotekun