Drama As Man Arraigned In Court For Alleged Assault(Photos)

A man simply identified as Aron Juma Munyasa has been arraigned before a Milimani Law Court in Kenya for allegedly touching a woman’s br*ast without her consent.

In the case presented before Chief Magistrate Wendy Kagendo Micheni, it was disclosed that the lady identified as M.A filed a case against Aron Juma Munyasa for touching her inappropriately as she sought employment at the ACK Gardens Annex building Nairobi on May 17, 2022.

“On May 17 at ACK Gardens Annex in Upper Hill within Nairobi County, you(Juma) intentionally and unlawfully touched the br*asts of M.A against her will”

It was further disclosed that the complainant had a meeting with a lady identified as Lucy who asked her whether she needed a job.

M.A excitedly accepted the offer and proceeded to the ACK annex building where the interview was set to take place, however when she arrived there was no one there except her assaulter. 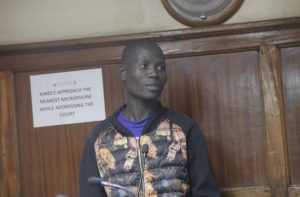 Ms. M.A was repeatedly assaulted while waiting for her ‘recruiter’ to arrive.

She told the police;

“As l waited for Lucy, Juma took advantage of the situation and indecently started touching my bre*st without my consent.

“I felt fingers grabbing the back of my arm as they squeezed me above my elbow, before groping me again around my ribs and bre*st”

Feeling violated by the inappropriate act, M.A immediately informed Lucy of Juma’s action, to her surprise Lucy asked her to cooperate.

After the unexpected outcome of events which forced her to spend the rest of the night in the building, M.A reported the incident to the police who immediately arrested Juma and arraigned him in court.

Juma denied the charges and was released on a Ksh150,000 bond. failure to which he would be detained pending the hearing and determination of the case.