It alleged that supercop, Abba Kyari intentionally conspired with some other persons including Ray Hushpuppi to “commit wire fraud”.

The document was released by Thom Mrozek, Director of Media Relations, United States Attorney’s Office to that effect after a press statement by the US Department of Justice noted Hushpuppi allegedly bribed Kyari to arrest a coconspirator, Kelly Chibuzo Vincent.

According to the court documents , DCP Abba Kyari “together with others known and unknown to the Grand Jury, knowingly conspired to commit wire fraud, in violation of Title 18, United States Code, Section 1343”.

Below is the documents below as obtained by DAILY GIST; 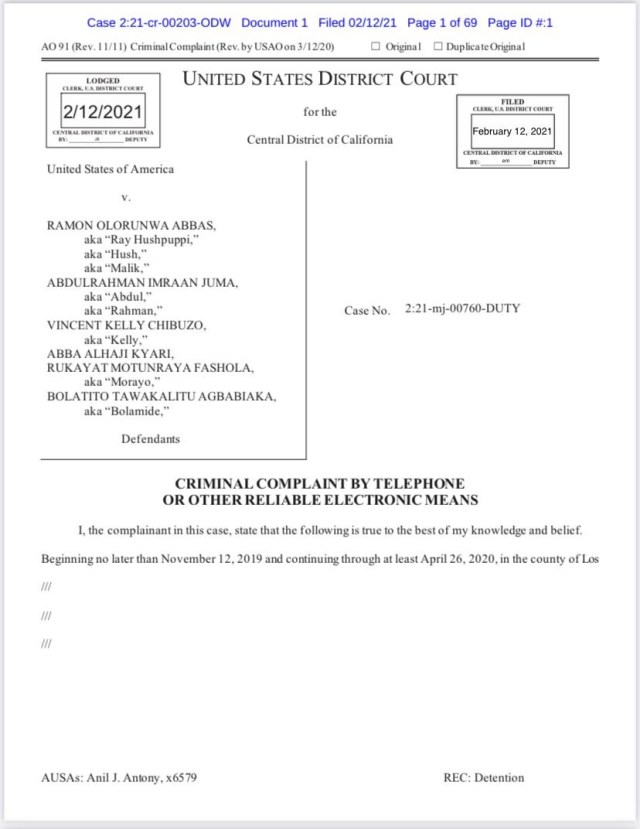 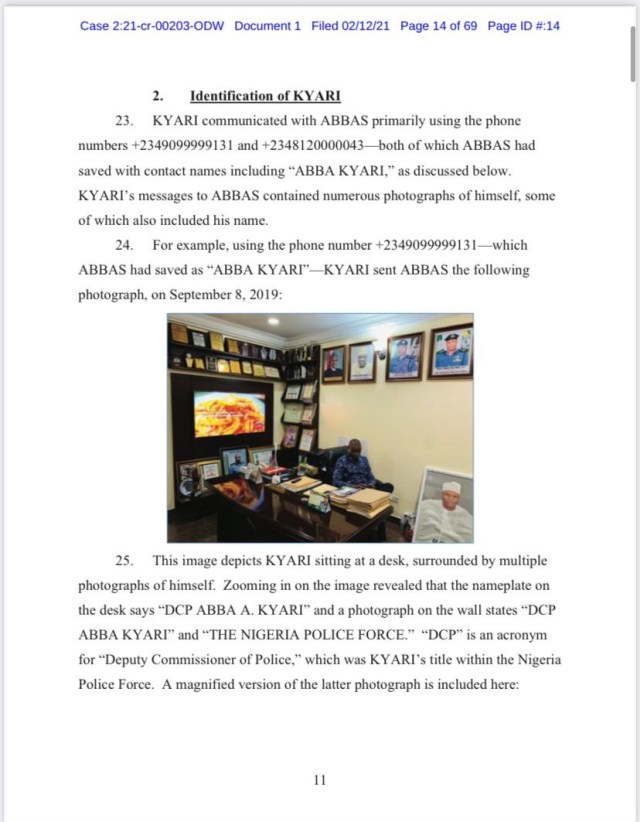 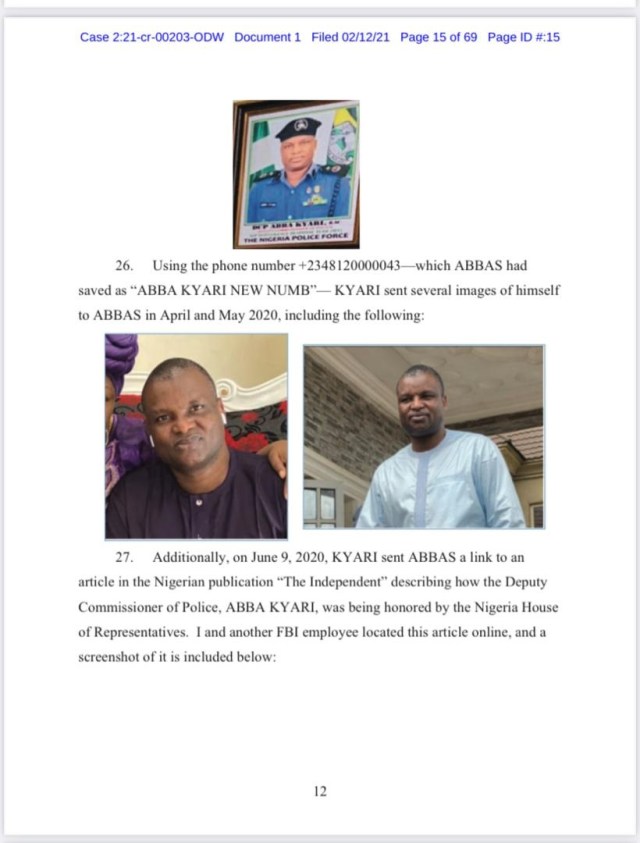 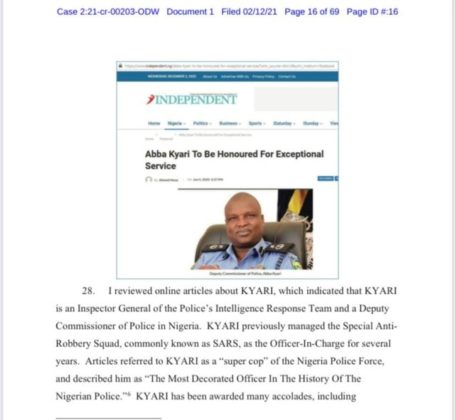 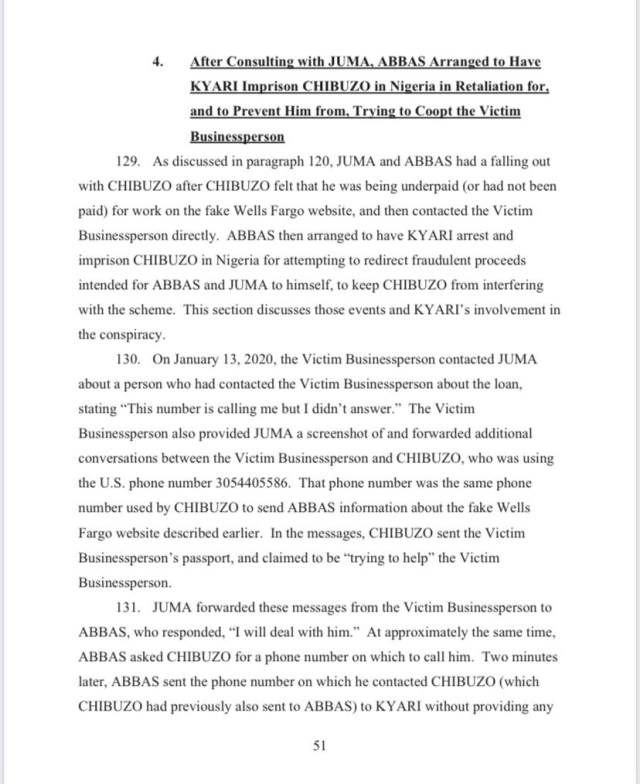 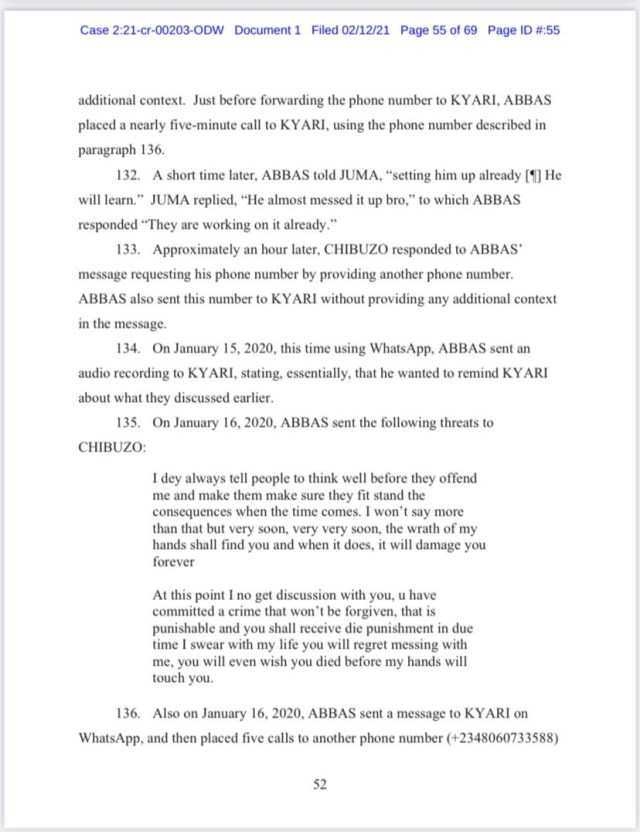 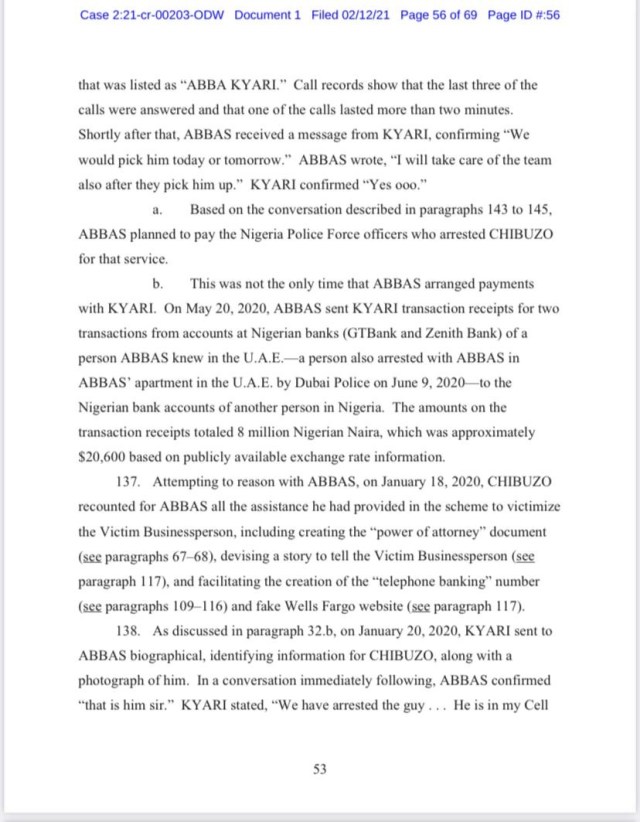 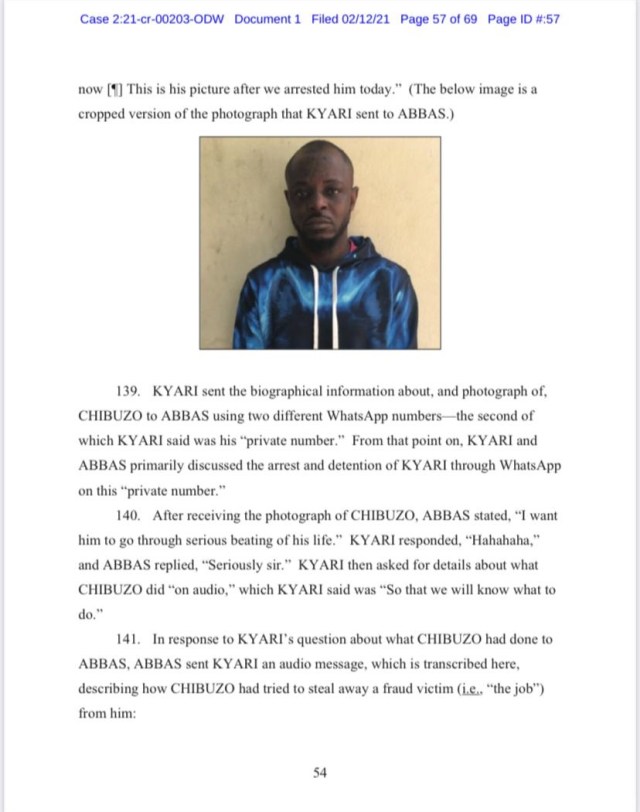 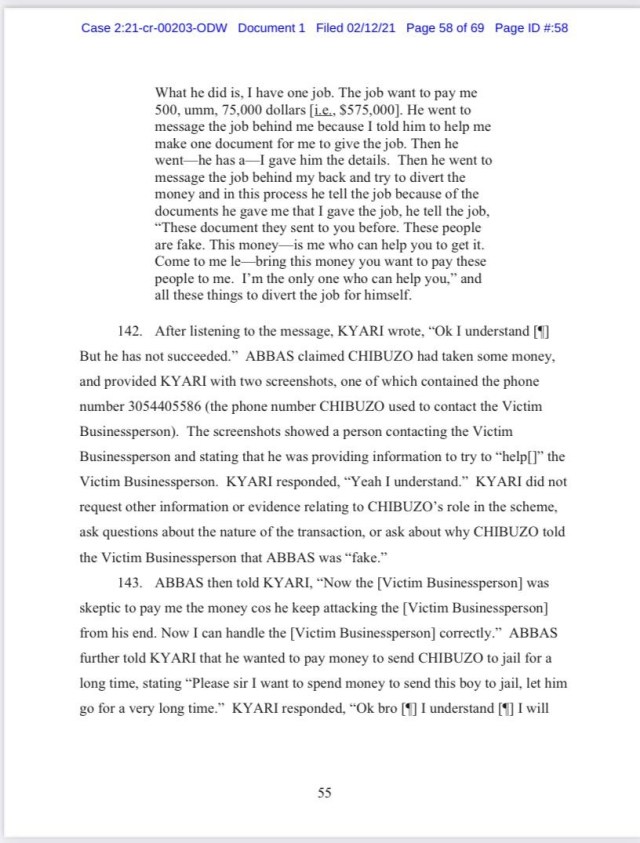 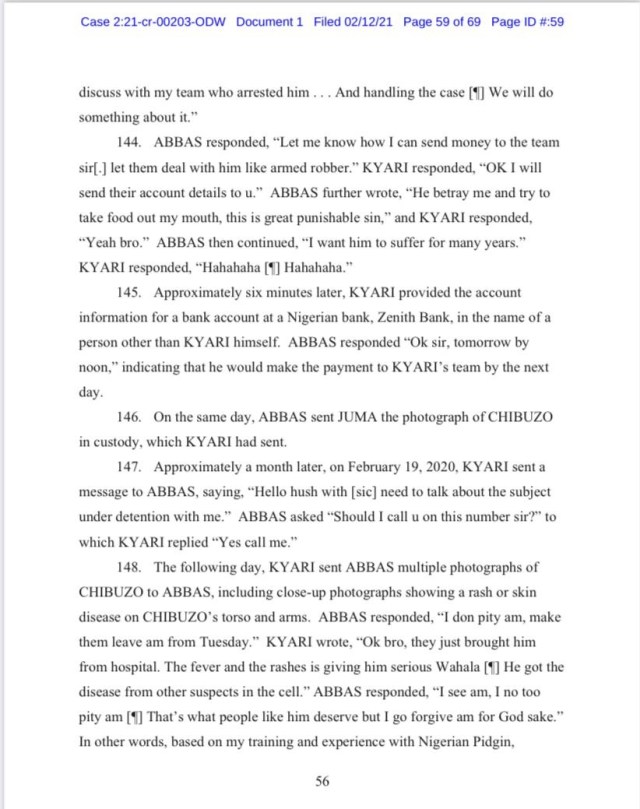 DAILY GIST reports that the Federal Bureau of Investigation(FBI) released what could be evidence nailing celebrated police officer, Abba Kyari

FBI released the damning phone conversations and WhatsApp exchanges between Hushpuppi and Kyari as evidence against the law officer.

The evidence clearly portrays his role as an accessory in the scamming of a Qatari businessman by Hushpuppi and gang.

Kyari on Thursday denied collecting any money from Hushpuppi, as compensation for arresting the fraudster’s partner Vincent Chibuzo.

But the court document has now exposed his lie.

The Inspector-General of Police Alkali Baba had seen the court record, making him to call for an “internal review”.

The tape is just too damning to extricate Abba Kyari as he is declared wanted by the FBI in connection with the $1.1 million scam.

Here is the full text of the conversation between Hushpuppi, full name Ramon Olorunwa Abbas and Kyari, as contained in the records of the United States District Court for the Central District of California.:

…On January 20, 2020, KYARI sent to ABBAS biographical, identifying information for CHIBUZO, along with a photograph of him. In a conversation immediately following, ABBAS confirmed “that is him sir.”

KYARI stated, “We have arrested the guy . . . He is in my cell now. This is his picture after we arrested him today.”

KYARI sent the biographical information about, and photograph of, CHIBUZO to ABBAS using two different WhatsApp numbers—the second of which KYARI said was his “private number.” From that point on, KYARI and ABBAS primarily discussed the arrest and detention of CHIBUZO through WhatsApp on this “private number.”

After receiving the photograph of CHIBUZO, ABBAS stated, “I want him to go through serious beating of his life.”

KYARI responded, “Hahahaha,” and ABBAS replied, “Seriously sir.” KYARI then asked for details about what CHIBUZO did “on audio,” which KYARI said was “So that we will know what to do.”

In response to KYARI’s question about what CHIBUZO had done to ABBAS, ABBAS sent KYARI an audio message, which is transcribed here, describing how CHIBUZO had tried to steal away a fraud victim (i.e., “the job”) from him.

“What he did is, I have one job. The job want to pay me 500, umm, 75,000 dollars [i.e., $575,000]. He went to message the job behind me because I told him to help me make one document for me to give the job. Then he went—he has a—I gave him the details. Then he went to message the job behind my back and try to divert the money and in this process, he tell the job because of the documents he gave me that I gave the job, he tell the job, “These document they sent to you before. These people are fake. This money—is me who can help you to get it. Come to me le—bring this money you want to pay these people to me. I’m the only one who can help you,” and all these things to divert the job for himself.”

After listening to the message, KYARI wrote, “Ok I understand [¶] But he has not succeeded.”

KYARI responded, “Yeah I understand.” KYARI did not request other information or evidence relating to CHIBUZO’s role in the scheme, ask questions about the nature of the transaction, or ask about why CHIBUZO told the Victim Businessperson that ABBAS was “fake.”

ABBAS further told KYARI that he wanted to pay money to send CHIBUZO to jail for a long time, stating “Please sir I want to spend money to send this boy to jail, let him go for a very long time.”

KYARI responded, “Ok bro [¶] I understand [¶] I will discuss with my team who arrested him . . . And handling the case [¶] We will do something about it.”

ABBAS responded, “Let me know how I can send money to the team sir[.] let them deal with him like armed robber.”

KYARI responded, “OK I will send their account details to u.”

ABBAS further wrote, “He betray me and try to take food out my mouth, this is great punishable sin,” and KYARI responded, “Yeah bro.” ABBAS then continued, “I want him to suffer for many years.” KYARI responded, “Hahahaha [¶] Hahahaha.”

Approximately six minutes later, KYARI provided the account information for a bank account at a Nigerian bank, Zenith Bank, in the name of a person other than KYARI himself. ABBAS responded “Ok sir, tomorrow by noon,” indicating that he would make the payment to KYARI’s team by the next day.

On the same day, ABBAS sent JUMA the photograph of CHIBUZO in custody, which KYARI had sent.

Approximately a month later, on February 19, 2020, KYARI sent a message to ABBAS, saying, “Hello hush with [sic] need to talk about the subject under detention with me.”

ABBAS asked “Should I call u on this number sir?” to which KYARI replied, “Yes call me.”

The following day, KYARI sent ABBAS multiple photographs of CHIBUZO, including close-up photographs showing a rash or skin disease on CHIBUZO’s torso and arms. ABBAS responded, “I don pity am, make them leave am from Tuesday.”

KYARI wrote, “Ok bro, they just brought him from hospital. The fever and the rashes is giving him serious Wahala [¶] He got the disease from other suspects in the cell.”

ABBAS responded, “I see am, I no too pity am [¶] That’s what people like him deserve but I go forgive am for God sake.”

In other words, based on my training and experience with Nigerian Pidgin, ABBAS was essentially stating, in part, “I don’t pity him. That’s what people like him deserve, but I will forgive him for God’s sake.”

Based on the date of the messages and later discussion described in paragraph 150, ABBAS was—on Thursday, February 20, 2020— requesting that KYARI not release CHIBUZO until Tuesday, February 25, 2020.

ABBAS then told KYARI that CHIBUZO’s girlfriend messaged him, trying to raise one million naira to secure CHIBUZO’s release, and said ABBAS promised to contribute 100,000 Naira. KYARI stated “They were thinking it’s normal arrest that is why they think money can remove him . . . No money can remove him here [¶] Hahahaha.”

ABBAS added, “But it’s better for them to think that way, I like it like that,” and KYARI responded, “Yeah.”

ABBAS then said, “No problem sir from Tuesday he can go,” apparently giving KYARI his blessing to release CHIBUZO from custody.

KYARI responded, “Ok bro [¶] We will also keep his phone and other gadgets for some weeks.”

ABBAS responded, “Yes those ones they should not give him again, those ones are gone . . . Make he no see those ones again for life,” instructing KYARI not to return CHIBUZO’s electronic devices.

KYARI responded, “Yes he will not see it [¶] again,” indicating that he would accede to ABBAS’ request.

Internet Fraud: How Abba Kyari Left His Duties In Nigeria To Enjoy With Hushpuppi In Dubai — FBI Speaks