by Ademola Adam
in HEALTH
0

The federal government on Sunday night has released the details of 90 persons declared wanted for violating COVID-19 guidelines.

It was gathered that the 90 persons wanted for violating COVID-19 rules guiding travellers into the country.

Those declared wanted include 63 Nigerians and 27 foreigners, DAILY GIST has learnt

They were declared wanted in a statement issued on Sunday night by the Chairman of the Presidential Steering Committee (PSC) and Secretary to the Government of the Federation (SGF), Mr Boss Mustapha.

According to the statement, the travellers are from India, Brazil and Turkey and they now constitute dangers to public health.

The travellers violated the directive which mandated travellers from any of the countries, or who had visited any of them 14 days prior to arrival in Nigeria, to undergo a compulsory arrival quarantine and testing protocols.

DAILY GIST however has obtained a list showing more details about those declared wanted including their names, passport number, country visited and their nationality 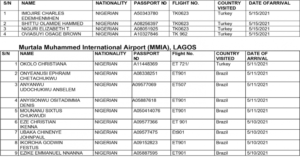 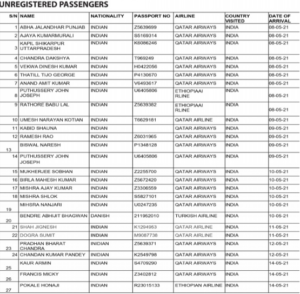 JUST IN: Management Speaks On Outbreak Of Marburg Virus At UNIABUJA Hospital