The youths who marched from Mokola to Sango area and chanted “Buhari must go” said President Muhammadu Buhari had failed and must leave for those who are capable of leading a country as complex as Nigeria.

The protesters had told the security operatives that they were ready to die for the betterment of the country.

DAILY GIST reports that similar protests were being held in Abuja, Ekiti, Ondo,Osun States on Saturday.

Among their demands was the resignation of President Buhari.

According to them the president has failed in addressing the challenges in the country, including that of insecurity. 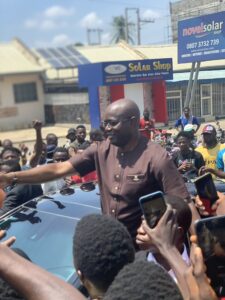 Makinde shocked the protesters when he drove himself to the venue with little security to address them.

Clad in a brown attire, governor Makinde emerged amidst cheers and loud praises.

In a video made available to DAILY GIST on Saturday, The governor could be seen joining the hundreds of protesters who stormed the streets of ibadan to express thier disatisfaction against Buhari government.

BREAKING: Journalist Forced To Hide In A Toilet To Escape Police Arrest(Photos)

CAN Vs FG: Court Delivers Judgement On CAMA Battle

The Federal Government has rejected the decision of UK government to add Nigeria to it's red-listed countries over omicron variant....

The Governor of Kogi State, Yahaya BELLO has assured Traditional, political, religious stakeholders from Kebbi and Sokoto states that he...

Android users have been seriously warned of new method hackers are using to access money by answering their calls. The...

Students seeking admission into Universities, Polytechnics, Colleges of Educations and other higher institutions will now have two more subjects to...

The British High Commission has halted the issuance of visas to Nigerians. The Commission said it has suspended visitor visa...

Faces of students that reportedly beat 12-year-old Sylvester Ororomoni, a student at Dowen College in Lekki has been revealed. DAILY...