There was a growing tension in the area as security operatives shot into the air and fired teargas to disperse a crowd of agitators who converged at the venue.

It was gathered that people in the area began to run helter-skelter when the police fired teargas and constantly shooting into the air. 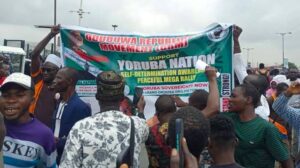 During the attack on the Protesters, One person has been confirmed dead by stray bullet from the gunshots, DAILY GIST has learnt

This is coming shortly after the Lagos Police Commissioner, Hakeem Odumosu addressed Journalists at the venue.

The lifeless body of the girl was crowded by sympathisers at the scene.

The girl, 14years old, identified as Jumoke was reportedly displaying drinks at a shop when the bullet hit her.

Her body has been covered with a piece of cloth as crowd gathered at the spot.

Her body was later whisked away in a police van to unknown location.

But reacting on the incident, Police spokesman said in a statement made available to Journalists that the Police did not kill the girl.

The statement read; “The attention of the Lagos State Police Command has been drawn to a news making rounds that a 14-year-old girl was hit and killed by police bullet today July 3 at the venue of the Oodua Republic Mega Rally in Ojota, Lagos.

“The command hereby wishes to debunk the rumour and state categorically that it’s a calculated attempt to create confusion and fears in the minds of the good people of Lagos State and the country at large.

“The command did not fire a single live bullet at Ojota rally today.

“The said corpse was found wrapped and abandoned at a distance, far from Ojota venue of the rally, behind MRS Filling Station, inward Maryland, on the other side of the venue, with dried blood stains suggesting that the corpse is not fresh,’’ Adejobi said. 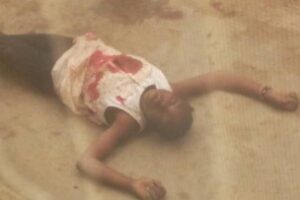 However, the names of the agitators arrested at the rally has been released.

The identity of the arrested individuals was disclosed to Journalists by the Iranlowo Omo Yoruba Group in a statement, a copy of which was forwarded to DAILY GIST.

Recall that the police and the Soldiers had taken over the venue of the rally in the early hours of Saturday to prevent the rally, the protesters later stormed the venue around 12pm

The protesters defied the heavy security operatives presence to stage their rally.

The separatists who gathered in their numbers on Saturday stormed the area around 12pm.

The agitators were seen holding placards, demanding an independent state for the south-west region.

”No going back; Yoruba nation now,” they shouted.

Some of the agitators were seen getting dragged into an armoured tank by policemen.

The protesters, who had dispersed and fled the scene at different locations went to regroup at the bridge also at Ojota.

The traditionalists while speaking to police men urged them to protect them rather than teargas them.

Note; This is a developing story that’s being updated, Keep refreshing this page for more details

The Nigerian government has opened up on why it has not revealed or named the sponsors of Bokoharam terrorists in...