by Ademola Adam
in POLITICS
0

FFK who was a strong critic of Muhammadu Buhari met the president in Aso Villa on Thursday.

He was brought to the Villa by the Chairman, Caretaker Committee of the APC, and governor of Yobe State, Mai Mala Buni.

Fani Kayode said that he was led by the Spirit of God in his decision and that he joined the APC to help for the unity of the country, adding that he was against anything that would cause the disintegration of Nigeria. 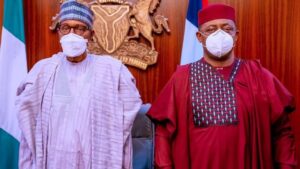 JUST IN: Twitter Reacts To Buhari’s Conditional Lifting Of Ban

He informed that he was instrumental for the exit of three Peoples Democratic Party, PDP, governors to the APC. The governors he mentioned were Dave Umahi of Ebonyi State, Ben Ayade of Cross River State and Bello Matawale of Zamfara State.

FFK in a post said; Somebody has come and joined the APC. And a large-hearted and magnanimous President received him. Because that’s the essential Buhari for you”

Two years ago when there were reports that he had returned to APC, Fani-Kayode said he would rather die than do so.

“I am committed to opposing the APC and those that are in their ranks for the rest of my natural life and I will never join them no matter what!” he had said at the time.

Below is one of his previous tweets in 2019;

JUST IN: Details Of Buhari's Meeting With FIFA President In Abuja Revealed